There are several folk music styles in Mexico, but each new one added to the previous, only to enrich and beautify, to let new sounds grow out of old ones. Let’s learn a bit about each of them!
Share on Facebook
Get in Messenger 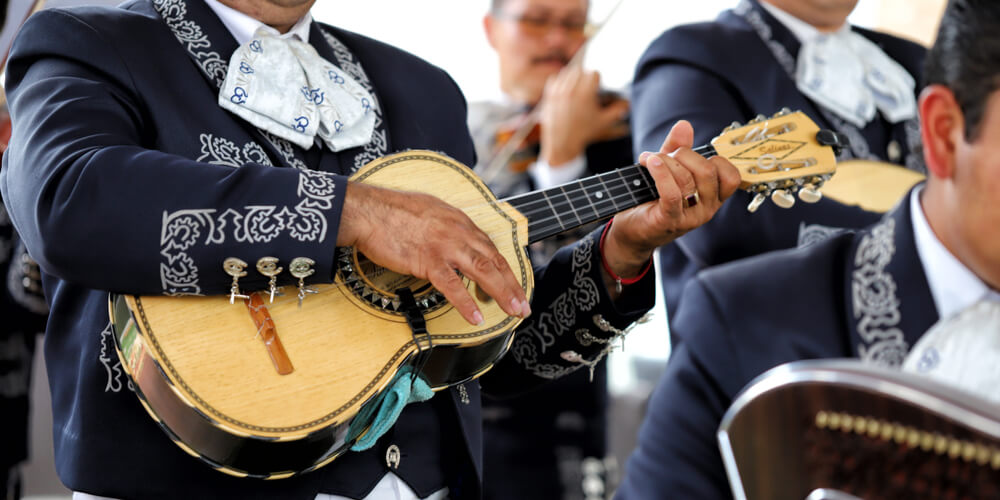 Mexican culture is very colorful and vivid, manifesting itself through every form and genre possible. Today, I’d like to tell you about the folk music styles of Mexico, their distinctive features, and peculiar beauty.

Mexico is one of the world’s most musically talented countries. Guitars, accordions, violins, and drums join together to celebrate happiness, love, history, and patriotism. There are several folk music styles in Mexico, but each new one added to the previous, not replaced it, only to enrich and beautify, to let new sounds grow out of old ones. Let’s learn a bit about each of them!

Mariachi music originated in the 19th century, in Guadalajara, a city in Mexican region Jalisco. The name itself was either derived from the French “mariage”, meaning marriage, and implying that Mariachi music was mainly performed at weddings, or from the Nahuatl and the Coca languages of Mexico, where the word denoted a specific dance performed on a specific stage-like platform made from wood. Anyway, now Mariachi is a style of folk music spread all across Mexico and performed at national holidays, like Mother’s Day, girls’ 15th birthday parties, family gatherings, women’s birthday celebrations (as a serenade), and, of course, weddings.

Musicians performing Mariachi music are also known as Mariachis; they have a very distinct clothing style – a black Charro costume studded with silver and a matching wide-brimmed sombrero. Typically, a Mariachi band consists of four or five guitar players, a large bass guitar known as the guitarrón (gee-that-ROHN), some violins, trumpets, one or several round-backed guitars called vihuelas (bee-WELL-ahs), a 28 to 40 string harp, and sometimes a small snare drum. Mariachis sing about very simple things that appeal to everyone, like love, for example, this is why this style of folk music is extremely popular and well-loved inside Mexico and beyond.

Like you’ve probably deduced from the style’s name, Ranchera music originated in rural areas of Mexico, on ranches, in response to aristocratic music that old rulers of Mexico enjoyed. It was strongly connected to the revolutions, hence its original rebellious character. After the disliked rulers were overthrown, Ranchera gained popularity, as it appealed to the hearts of simple people.

One distinctive feature of Ranchera music is the type of yell done by musicians or people from the audience. Known as “El Grito Mexicano”, it is produced during instrumental parts and is used in no other Mexican folk music style.

Norteño music is a mix of Ranchera and musical elements from waltz and polka brought to Mexico by European migrants in the 19th century. The style originated in Northern Mexico, hence its name (Norteño is the Spanish for “Northern”); however, it is also known as ‘Grupero’.

Norteño music relies on a guitar with 12 strings known as bajo sexto and an accordion. Its polka-like beat is medium-fast or fast.

People of Mexico enjoy various music styles and genres from various countries, but there will always be a very special place in their hearts for local folk music, passion inspiring, vibrant, and century-old. You will surely love it, too, if you don’t yet. Come to Mexico and listen to the beautiful sounds of Mariachi, Ranchera, and Norteño performed live!

Spanish word game is waiting for you!
See how many words you will guess!
START QUIZ
El Grito Mexicano: What is it and How to Use it?
Learn more about one of the most typical elements of the Mexican culture!
funny-spanish.com
Busting Myths about Mexico
Let’s dispel the stereotypes and see Mexico the way it is: proud and beautiful.
funny-spanish.com