Take a look at the most impressive pyramids in Mexico and learn some facts from the ancient culture.
Share on Facebook
Get in Messenger 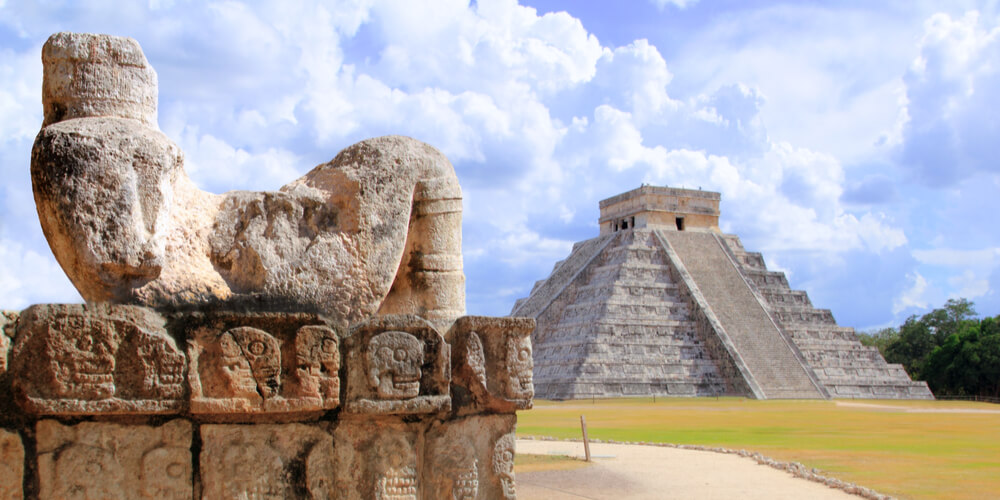 Hearing the word “pyramids” instantly triggers Mexico-related associations in my mind. No offense to Egypt – their pyramids are gigantic, impressive, historically important, iconic, and all, but for me, the pyramids in Mexico have more charm, more power, and more appeal. Today I decided to tell you about the most amazing of them.

The Yucatan jungle once harbored one of the most important cities of the Mayan civilization – Calakmul, or the kingdom of the snake. With this in mind, the four tombs discovered in the Great Pyramid in Calakmul are most likely to be the royal resting place. The jungle I mentioned earlier makes the site unique in another way – it has become a natural reserve, home to various tropical bird species, as well as howler monkeys.

The Coba ruins are not only one of the largest historical sites in Mexico; they also have Nohoch Mul - the tallest pyramid in the Yucatan. Historians believe that Nohoch Mul was once connected to several settlements with the total population of about 50, 000 via sixteen ceremonial roads. Meaning “large hill”, Nohoch Mul is definitely large – one has to climb 120 steps to reach the top and admire the view of the two lagoons, which are very likely to have taken part in the formation of the area’s name since Coba means “the wind over water”.

3️⃣ Pyramid of the Magician

The versatility of architecture one can find in the area certainly explains the name Uxmal, meaning “built three times”. Built in Uxmal during the Mayan civilization, the Pyramid of the Magician is aligned with Venus and the setting sun only to give another piece of evidence of the Mayas’ extensive knowledge and use of astronomy.

4️⃣ Pyramid of the Moon

Founded some two thousand years ago, Teotihuacan was one of the first largely populated settlements in Mesoamerica. The Aztecs named the place “the city of Gods,” but only because they first visited it after the city had been abandoned by people. Built around 200 – 450 A.D. and dedicated to the Great Goddess, the Pyramid of the Moon is the 2nd largest in Teotihuacan. The construction represents several pyramids placed one on top of the other, each containing a new burial chamber. The whole design of the Pyramid of the Moon imitates Cerro Gordo, a mountain located in the vicinity.

5️⃣ Pyramid of the Sun

The Pyramid of the Sun is the largest and the tallest in Teotihuacan, and also the oldest of all the Mayan constructions. It was also shaped to imitate the landscape or the area, and it also has several burial chambers, each located in a different layer of the pyramid. Historians believe the Pyramid of the Sun to have been one of the most important ceremonial sites. The set of chambers found in the depths of the pyramid was probably used for rituals involving fire and water.

6️⃣ Pyramid of the Niches

A little more than a thousand years ago El Tajín played a very important role on the Mexican coast. Of what has remained of the prominent gulf city now, the Pyramid of the Niches is the most notable. Reaching up to the height of 66 feet, the pyramid consists of seven big layers, which can be climbed via the staircase on the eastern side of the pyramid. Decorative niches that gave the pyramid its name make the pyramid very unusual: they add depth to the construction. Moreover, they were originally painted black to make them appear even deeper against the dark red background of the main structure.

This is probably the most famous of all Mexican pyramids. Located in Chichen Itza, the Temple of Kukulkan represents an impressive step-pyramid dedicated to the feathered serpent, an important Mayan God. And one can still see the serpent sliding down the banister of the pyramid, but only during the sunset on the days of the fall and spring equinox, which once again proves the Mayan knowledge of astronomy. Moreover, if you count all the steps on all the sides of the pyramid, you’ll get exactly 365 – impressive, huh?

A trip to Mexico is only a dream for me at the moment, but thinking of all those grand gorgeous pyramids makes me more determined to turn this dream into a goal! And what about you? Would you like to see those pyramids someday?

And now, a Spanish true-false word game!
Give your answers and see if you are right!
START QUIZ
Huichol Art of Mexico
Learn about the amazing Huichol artwork, its history, creative traditions, technology, and modern state.
funny-spanish.com
Stingy Jack: the Tale of How a Turnip Turned into a Pumpkin
Have you ever wondered where the tradition of carving ghoulish faces into sunny pumpkins and illuminating them with candles came from?
funny-spanish.com